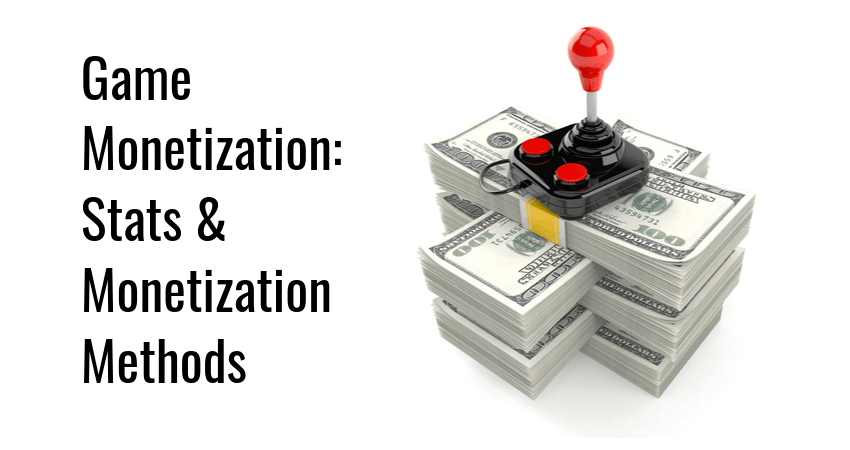 The video game industry is a profit-making machine.

It eclipses all other entertainment industries in terms of revenue, earning $180 billion in 2021 alone. There are historical reasons for this that go as far back as the 70s and the golden years of home consoles and arcade gaming.

But there’s another aspect to it, one that has to do with how easy it is to monetize video games. Because video games are both entertainment and software, they provide content, as well as the means to sell it.

In the remainder of this piece, we will examine some of the monetization strategies video game publishers have employed in recent years to varying degrees of success.

The video game industry is notoriously silent when it comes to sharing video game sales data. Major successes are always hyped up in the news, but we know remarkably little about everything else.

That said, some figures have come out over the years, and they indicate that video game monetization is on the rise, as are the profits. Here is a sample of currently available data, courtesy of Statista:

Check out our post on streaming stats if you are an up-and-coming game streamer.

The video game industry employs a variety of monetization strategies and practices. They range from traditional methods such as retail and merchandising, to novel techniques such as loot boxes and NFTs.

While some game publishers limit themselves to one or two strategies, the overall tendency (at least in the realm of big-budget AAA titles and free-to-play mobile games) has been to include as many monetization methods as possible. This has led to public backlash against some forms of video game monetization, most notably loot boxes and lately NFTs.

With that in mind, here is an exhaustive list of monetization methods you can find in modern video games.

These monetization methods have a long history. They come from a time when video games were just another entertainment product and were monetized in a similar way to toys, movies, and music.

Retail has been on its way out for a while, thanks to the rise of ecommerce, but it still plays a significant role in video game monetization. Retail is nowadays typically reserved for collector editions of games, as well as titles from previous gaming console generations.

Online sales are the default method for video game distribution. The trend started with the success of Steam, Valve’s digital game storefront. Valve had a de facto monopoly on PC game sales during the 2000s and 2010s, but has since had to compete with GOG and Epic Games Store.

Learn how to make money as a content creator and start your online fame today!

Game preorders have evolved over time. In times when physical copies were the distribution method of choice for video games, preorders were a way to secure your copy when supplies were limited. Nowadays, preorders are mainly used to gain access to special preorder editions, which often come with limited items, cosmetics, and other extra content.

Expansion packs were a way to extend the shelf life of a game by providing extra content. Expansion packs have gone the way of the dinosaurs and have been replaced by newer content monetization models such as DLCs and micro-transactions.

Selling branded merchandise is common practice in all areas of entertainment, and video games are no exception. The most common form of video game merchandise are figurines of in-game characters, branded clothing, and collector items specific to particular games, such as a real-life replica of a sword from an RPG.

If you want to monetize your gaming servers, Glimpse is the perfect platform to do so. Sign up as a Glimpse creator and connect your game servers to Glimpse with the Gaming Servers feature. Then start charging access using Glimpse’s sponsorship system.

You get to keep every dollar earned as Glimpse has 0% fees.

In-game purchases have been the big thing in-game monetization during the past ten years. The trend started in MMORPGs, where certain items and cosmetics were coveted to the point where gamers were willing to spend real-world money to acquire them. While there were some initial hiccups in its implementation (i.e., Diablo 3’s Auction House system), in-game purchases are now the norm. They come in several forms.

Microtransactions refer to the practice of selling minor in-game bonuses and cosmetics for a small fee, typically in the range of $5. They came into the spotlight with the release of The Elder Scrolls IV Oblivion, a game that featured cosmetic horse armor that could be unlocked for a small fee.

Microtransactions were met with outrage by gamers, as cosmetics used to be freely included in games or unlocked by completing achievements. Today, microtransactions are used across the industry, proving that with enough marketing, the gaming industry can neutralize complaints and criticism.

DLC stands for downloadable content. The successor of video game expansions, DLC is delivered as a digital download rather than a physical disc. DLCs typically provide more extensive content additions compared to micro-transactions, but the line between the two is somewhat blurred.

Loot boxes take the concept of booster packs from card games such as Magic the Gathering, and apply it to digital items. They are essentially packs containing a random selection of items such as weapon skins, character outfits, voicelines, and other paraphernalia.

Players typically receive lootboxes for free as they play the game but then have to purchase separate unlock keys to gain access to the contents. The motivation is the possibility of acquiring ultra-rate items, which is why some have compared lootboxes to gambling.

Season passes are like preorders for DLCs. By purchasing a season pass for a game, players gain access to premium updates to be released in the future. Season passes also typically grant rewards that can’t be obtained after the pass has expired. They were the subject of a lot of controversies, as some critics argued that companies are charging money for products that don’t exist and might never be released.

Advertising is a common revenue source for video game publishers. The revenue comes from third parties which pay video game publishers to advertise their products and services within their games. This monetization model is most common in mobile games and free-to-play games. It is less common in big-budget titles, as customers don’t want to sit through ads after purchasing a premium gaming product.

Display ads are similar to website ad banners in that they occupy a portion of a game’s UI to display ads. Most people find them intrusive but are willing to put with them if the game is otherwise free.

Pre-roll ads are similar to TV commercials in that they are displayed during the game at set intervals, typically during game startup or when the game is loading. Some find them less annoying than other forms of advertising since the player can’t do much while the game is loading anyway.

Playable ads are a new iteration of the idea of playable demos. But instead of downloading a demo, players get to try out a game in their browser, typically in the part of the UI reserved for banner ads. The downside to playable ads is that they tend to consume a lot of PC or mobile resources, which makes them unusable on older devices.

Product placement is the practice of featuring branded products as in-game items. The practice is nothing new, and it is most common in sports games like Madden or NBA. Other examples of product placement include cars in racing games and guns in shooters.

Crowdfunding is a form of investment where gaming fans donate to support the development of a game they like. Kickstarter pioneered the practice, with some notable success stories such as the indie darling Undertale, retro-platformer Shovel Knight, and old-school RPG Pillars of Eternity.

NFTs in gaming are an attempt to cash in on the blockchain craze. At their core, NFTs are a way to monetize unique in-game assets such as virtual land, items, creatures, and anything else with certified rarity.

The monetization part comes from the fact that NFTs are traded on the blockchain, with publishers taking a percent from each transaction. NFTs games have been the subject of much controversy lately, and we have yet to see how things will play out.

Meta layer monetization is an attempt by some game publishers to broaden the scope of what can be monetized in a game. The idea is to monetize a variety of meta-layers beyond the core gameplay, including character customization, collectible items, and even access to elements of the game’s story.

The practice is still new, with few games supporting it, but if existing monetization trends in gaming are anything to go by, we’re bound to see more of it in the future.

This concludes our overview of the current state of video game monetization. We can see that game publishers are eager to increase their profit margins by any means necessary, and the result is that video games have become little more than vehicles for earning money.

Naturally, gamers are pushing against excessive monetization, leading some publishers to remove shockingly bad monetization mechanisms from their games. This battle is likely to continue in the future, and the jury is still out on who will win in the end.