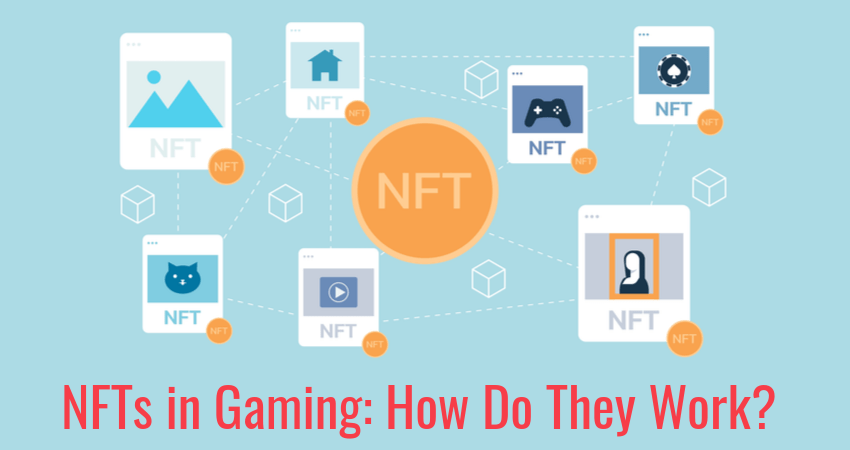 NFTs are all over the news. It might have something to do with the fact that in 2021, the total market cap for NFTs jumped from $55 million to more than $7 billion. Sensing profit, the video game industry seized the opportunity to jump on the NFT bandwagon.

The result is a bunch of games with NFT mechanics. Some are still in development, others are being rebranded as NFT experiences, while a few recent releases have managed to become quite popular.

If all of this sounds confusing, you probably need an introductory course on NFTs in gaming. Read on to find out what NFTs are and how they are used in gaming.

NFT stands for non-fungible token. An NFT is a non-interchangeable unit of data stored on a blockchain. NFTs can be associated with digital files and as such they act as an ownership certificate or proof of authenticity. The jury is still out on whether owning an NFT confers legal rights to the file attached.

That being said, NFTs can be traded and sold via blockchain, which acts as a public ledger for tracking ownership. For this reason, NFTs are sometimes considered speculative financial assets.

How Do NFTs Work in Gaming?

The way NFTs work in gaming is fairly straightforward. Video game assets such as in-game items, character models, textures, or sounds are essentially just files or collections of files. This means you can attach NFTs to them.

Now, it wouldn’t make much sense to attach NFTs to generic, functionally identical items such as default player skins, starter equipment, or environmental objects such as trees and stones. After all, these are freely accessible to everyone, so there is no incentive to “own” one.

On the other hand, NFTs do make sense for rare or unique in-game items and assets. Things like ultra-rare loot, custom skins, items that exist in a limited quantity, and anything that has a high perceived value among players. And where there is value, there is fertile ground for trade.

NFTs have also become one of the newer ways game developers can monetize their games. Learn more about game monetization.

Why Is NFT on the Rise in Gaming?

Trading real-world currency for in-game items is nothing new. Players can purchase rare items and skins directly from video game publishers, usually at a fixed price, via the various in-game item stores. But what players couldn’t do up until now is trade these items for real-world currency. If you wanted a rare skin that someone else happened to own, you had to purchase their game account or pay them via a third-party service.

What NFTs offer is a way for video publishers to create their own market for in-game items. This enables players to hold stakes in the digital economy of a video game through NFTs. The publishers can then take a cut of all NFT exchanges with transactions fees, creating a new revenue stream in the process.

NFTs are on the rise in gaming as they are being promoted by video game publishers wanting to increase profit by creating a speculative asset market within their video game ecosystem. As for players, the lure of making it big by trading NFTs is driving some to play so-called Pay2Contribute games, where in-game rewards come pre-attached with NFTs.

Glimpse offers content creators an easy way to monetize their work. Sign up as a Glimpse Creator and monetize your content with Glimpse’s tiered sponsorship system. You don’t have to worry about fees either – Glimpse has 0% platform fees for content creators.

NFTs have yet to see industry-wide adoption due to substantial player backlash. Nevertheless, major publishers such as Square Enix, Ubisoft, Electronic Arts, Take-Two Interactive, and Zynga have expressed interest in developing games with NFTs. Ubisoft has been leading the charge with the addition of NFT mechanics to popular game series such as Ghost Recon, Far Cry, and Assassin’s Creed.

While the big players make slow progress towards NFT adoption, smaller publishers and game developers have rushed in to fill the vacancy. Consequently, the top 5 NFT games all come from small studios.

Axie Infinity is a fantasy battle game where players collect monsters and pit them in matches against other players. The monsters have NFTs attached to them, and players are encouraged to trade for rare and unique specimens. Axie Infinity was developed on the Ethereum blockchain.

CryptoKitties is a virtual pet game where players breed and sell virtual cats, themselves actual NFTs. It is one of the earliest NFT success stories. The game is based on Ethereum, and the surge of interest for the game back in 2017 caused a massive slowdown of the Ethereum network.

The Sandbox is a sandbox game where players take on the role of deities with the power to reshape the world and create their own gameplay. It is a re-release of an earlier game with the same title, this time with NFT mechanics centered around owning virtual land. Promotional partners for the game include some big names like Snoop Dogg, Richie Hawtin, Deadmau5, and the Smurfs.

Decentraland is a 3D virtual world where users can redesign the landscape, creating stunning recreations of real-world landmarks. Players can purchase virtual properties and trade cosmetic items, both features powered by NFTs.

Check out the full list of the best NFT games currently on the market.

Augmented reality bridges the gap between digital reality and everyday life by superimposing digital entities over real-world locales. Through this process, a potentially limitless source of meaningful, unique entities is created. In principle, there is nothing stopping companies from attaching NFTs to AR versions of the Notre Dame, the San Francisco Bridge, the Lance of Longinus, or the Doomsday Clock. However, here the question of NFT ownership comes back in full force: Can you claim to own a digital representation of a real-world item?

These issues carry over into potential NFT-based AR games. Current AR NFT games are far more limited in scope than what the technology allows. One prominent example, Gates of Ethernity, combines AR monster collection in the style of Pokémon GO with NFT-based ownership of rare monsters.

NFTs in games is still a relatively new phenomenon, and much is yet unresolved in regards to its true value. There is both cautious skepticism and wholehearted acceptance, success stories, and public backlash, and it’s still early to tell what will become of the NFT market.

For now, it’s enough to know where things are at the moment. After reading this article, we hope you’ve picked up some new info and got a clearer picture of the situation with NFTs.