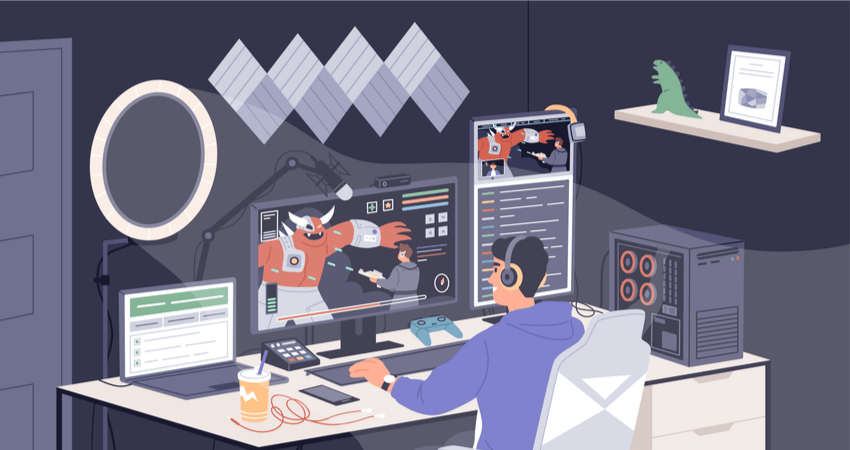 If you want to get into video game streaming, you will need a platform for your content.

Back in the early 2010s when game streaming was just taking off, there was only a handful of platforms for streaming video games. Much has changed since then. Now, you can choose from a variety of platforms for broadcasting your gaming streams.

In this article, we’ll walk you through the five best streaming platforms for gaming in use today.

Twitch is the streaming platform that started it all back in 2011. Twitch is synonymous with game streaming, and for good reason. It is home to approximately 9.5 million content creators, 85 percent of whom stream video games.

Twitch became successful thanks to its simplicity. It is a platform dedicated to streaming games, and all of its features support this basic functionality. If you want to stream games on Twitch, all you have to do is register a free account, connect it to your streaming app of choice, and you’re ready to go.

In addition to hosting livestreams, Twitch gives game streamers the option to promote and monetize their content through ads, subscriptions, and partnership programs. To be eligible for these benefits, streamers have to follow strict codes of conduct (such as not using hate speech) and content policies (such as not using copyrighted material).

If you want to get your feet wet in game streaming, Twitch is a good place to start. It will give you a taste of what streaming is all about, and its massive userbase is a good testing ground for your content.

If you are looking to start your career in game streaming, check out our post How to Become a Video Game Streamer.

YouTube started supporting live streaming in 2013. Since then, it has become a major player in the world of game streaming.

The secret to YouTube’s success as a streaming platform is its massive userbase combined with its powerful recommendation algorithms (courtesy of Google, which acquired the company in 2006). This allows video game streamers to easily find an audience, no matter which game they choose to stream.

There are two reasons why YouTube is a good Twitch alternative. One is the ability to optimize your content for YouTube’s search engine (SEO) with content tags and descriptions to reach more viewers. The other is its support for streaming 4K video, which is a huge plus for video game streaming.

YouTube has its downsides—especially the ability for users to leave negative comments. However, it is still a strong choice for game streaming.

Check out the most important streaming statistics for 2022.

Facebook had a rough start to game streaming. Facebook’s livestreaming service, Live, was plagued by performance issues, and content recommendations were often hit and miss. This slowed its growth as a platform. In 2018, Facebook rebranded the service into Facebook Gaming, now a dedicated streaming platform for video games.

The main selling point of Facebook Gaming is its mobile streaming feature. Facebook already offered streaming support in its mobile app, which made it easy to stream mobile games. Now that games like Fortnite or Minecraft are available on mobile devices, you can easily stream them to Facebook’s 2.8 billion users—not a bad way to enter the world of game streaming.

With that being said, Facebook’s userbase is losing its Gen Z users to platforms such as TikTok and Instagram. This limits its appeal for game streamers who want to grow their audience.

It’s still worth it to use the platform, especially since it has gained an influx of gamers after Facebook partnered with Microsoft to transfer users from its recently discontinued Mixer game streaming platform.

Check out the famous Minecraft streamers and Hearthstone streamers!

Caffeine is a newcomer in the live streaming space (the service launched in 2018). It’s marketing itself as a platform for game streaming, especially eSports.

Some of the most streamed games on Caffeine include Apex Legends, Fortnite, and Overwatch. Caffeine is the perfect environment for gamers looking to stream these games. If you’re interested in streaming more obscure games, you’re out of luck—Caffeine has a limited list of supported games.

Caffeine is not a bad choice if you plan on streaming mainstream games. The built-in social features can also help you differentiate yourself as a game streamer.

Steam received a feature update in 2014 that allowed users to stream gameplay to people in their friends’ networks. This update turned Steam into a viable platform for private game streaming, a niche that is still largely untapped.

Steam is in a unique position as a streaming platform thanks to its massive library of games and its support for dedicated servers. You can set up private dedicated Steam servers for games and stream only to users that you’ve personally invited. However, you need to have an extensive friends list to make this an effective tactic for promoting yourself as a game streamer.

Steam’s major downside as a streaming platform is that it lacks any monetization feature whatsoever. So, while you can technically earn money by streaming on Steam, you’d have to use a third-party monetization service.

Glimpse gives game streamers and other content creators a platform they can call home. Our goal is to give game streamers full control over their content.

On Glimpse, you can:

We believe that game streaming is hard work. That’s why content creators on Glimpse get to keep every dollar they earn on the platform. There are no registration fees or subscription tiers either. Every game streamer has full access to Glimpse features, including:

Game streaming is easier than ever, thanks to the variety of platforms you can use. Each platform offers streamers something different, so choose according to your needs. And if you want an all-in-one solution, give Glimpse a try.