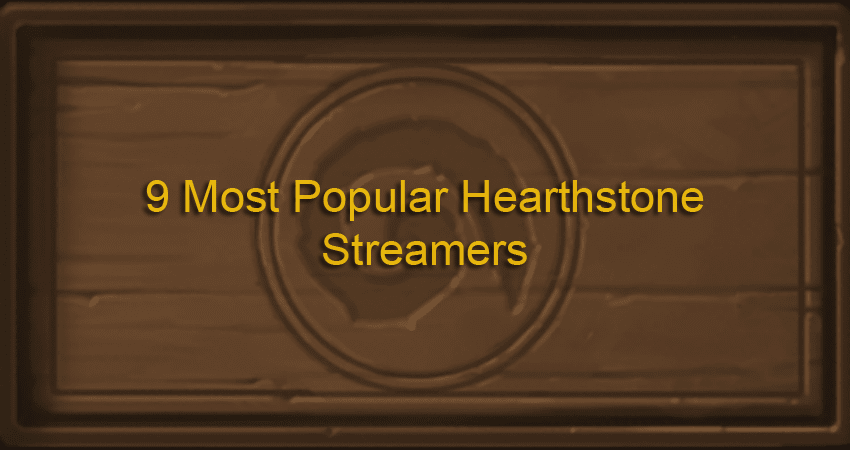 If you’re hooked on Hearthstone, you can follow Hearthstone streamers for an extra dose of card game goodness in your life.

Hearthstone streamers come in all shapes and sizes. Some are no-nonsense e-sports veterans seeking to perfect their craft. Others love to analyze the game and share their insights. Some are in it for the joy of playing a wacky deck and making fans go wild with laughter. Others try to do all of these things at once.

Hearthstone has cultivated a massive streaming community over the years, so you’re bound to find a streamer you like. If you want so skip the hassle of browsing through Twitch to find one to follow, check out our curated list of the top 9 Hearthstone streamers.

Kripp (short for Kripparian), is a streaming legend, and probably the most successful Hearthstone streamer of all time. He rose to prominence as a WoW and Diablo 3 streamer, but he eventually made Hearthstone his home. On Twitch, he has more followers than Blizzard’s official Hearthstone channel.

What sets Kripp apart from other Hearthstone streamers is his love for unorthodox cards and decks. He does extremely well in the Arena, often winning games with cards that most players would scoff at.

Kripp is a great entry point into Hearthstone streaming. He’s very entertaining, and you might even learn a thing or two about playing in the Arena mode.

Thijs is one of the best competitive Hearthstone players in the world. He rose to fame after winning the HearthstoneEuropean Blizzcon Championship twice.

His dedication as a streamer is also impressive – it takes a special kind of player to stream eight hours a day, five days a week.

E-sports players have a reputation of being aloof. Thijs breaks the mold by being one of the nicest Hearthstone streamers out there. His love for the game seems genuine, and his Twitch channel is brimming with positivity.

Thijs loves trying out new decks on his stream and figuring out ways to make them work.

If you have any interest in competitive Hearthstone, don’t miss out on Thijs. Watching Thijs casually destroy his opponents with a smile on his face will probably inspire you to give e-sports a try.

Dogdog is one of the most well-known Hearthstone players in the US. He played competitively for Team Solo Mid, and he’s among the top ranked on Hearthstone’s Duel ladder. He recently moved away from competitive e-sports and started doing more streaming.

Dogdog is a cool operator. He never loses his temper while playing, and he comments on the game in a cool, detached voice, making for a relaxing viewing experience. These days, he mostly plays Battlegrounds, although he goes back to Duels from time to time. He likes trying out new tactics on his streams.

If you want to see what it’s like to climb the ladder from the lowest ranks to the top, dogdog is your guy. Not only will you learn good strategies for playing the game, but you’ll also learn to maintain a cool demeanor when things go wrong.

Eloise brings much needed diversity into the world of Hearthstone streaming. She got her start as a professional streamer playing Shadow Priest in WoW. Eloise has a massive audience both in China and abroad. She streams in English, and is a massive Hearthstone otaku (basically “super-fan” in Japanese).

Although her Hearthstone skills are nothing to scoff at, Eloise is primarily an entertainer. She plays into the “gamer girl” archetype by doing cosplay, playing anime music, and even singing. Her fans are a friendly bunch too, making for an enjoyable streaming experience for casual Hearthstone fans.

Eloise proves that Hearthstone is more than just a game, it’s a social experience. And there are few streamers more sociable than Eloise.

Trump is one of the best-known names in Hearthstone. He streams daily for hours on end, easily attracting over 20,000 concurrent viewers per stream. In addition to streaming, Trump also has an active YouTube channel where he shares clips taken from his streams.

Trump is a veritable Hearthstone guru. His knowledge about the game knows no bounds. He loves to share his wisdom, much to the delight of fans. Trump always breaks down cards, decks, and strategies to find their value, offering great educational content for new Hearthstone players.

If you want to be entertained as well as educated while watching a Hearthstone stream, don’t miss out on Trump.

Firebat exploded onto the scene in the 2014 Hearthstone World Championship, where he had an amazing run full of clutch victories and epic turnarounds. Recently, he launched his own tournament, the Firebat Swiss Open, providing an alternative to the Conquest format used for most other Hearthstone tournaments.

Firebat is an exceptional analyst. He keeps track of Hearthstone data such as card value, matchups, decks, and even opponent profiles in a massive spreadsheet. This gives him a competitive edge against his opponents and is a valuable tool for educating his viewers on the intricacies of the game.

Firbat’s extensive knowledge of the game makes him the quintessential competitive streamer. If you want to take your game to the next level, start by following Firebat.

Kolento is a high-profile competitive Hearthstone player. He has a proven track record in tournaments as well as the ladder. His play style is to minimize mistakes, making him a fearsome opponent. He really does win all the time.

In addition to watching him destroy his opponents, stream viewers can except to find in-depth metagame analysis, card breakdowns, and even some creative deckbuilding (Kolento popularized the innovative Miracle Rouge deck). This makes him a favorite among players that netdeck (copy existing decks from the web instead of coming up with their own).

Whether you’re a competitive player or a casual one, watching Kolento’s streams can drastically improve your game.

Kibler is a legend among card game fans. He started his career as Magic: The Gathering player almost 20 years ago and has since moved on to playing Hearthstone. His doesn’t play competitive Hearthstone. Instead, he focuses on sharing his knowledge and love for the game by streaming.

Kibler is an avid deck builder, courtesy of his experience with MTG. He plays Constructed Hearthstone, and loves making decks that are always cool, unusual, and very effective. He has a penchant for playing dragon-themed cards.

If you don’t care much for the e-sport aspects of Hearthstone, and you just want to explore it as a game, Kibler has you covered. You will learn a lot about the mechanics of the game and how they interact to produce entertaining matches.

SilverName is a well-known name (no pun intended) in the international Hearthstone community. He doesn’t stream in English, but he’s among the most popular Hearthstone streamers in the world, trumping even big shots like Kripp.

Language barrier aside, SilverName is an exceptional Hearthstone player. He makes lightning-fast plays, leaving fans on the edge of their seat. He’s the quintessential foreign ace – he doesn’t speak English, but his plays leave his opponents speechless anyway.

Watching international streamers is a great way to move out of your comfort zone and learn the game from a different perspective.

Check out our list of the top Minecraft streamers as well!

Whether you’re a casual Hearthstone player or a pro, sometimes it feels good to take a break from the game and watch someone else play for a while.

So, sit back, relax, and check out these top Hearthstone streamers. If you want to start streaming games yourself, check out what gear you need for a game streaming setup.