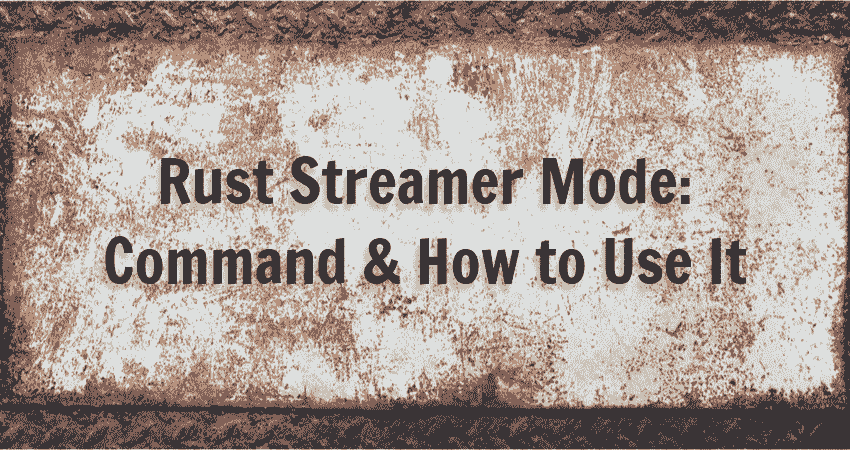 Did you know that Rust has a built-in mode for livestreaming? It was included in an official update, but few players seem to know about it, which is a shame since it is a very useful tool for preventing stream sniping.

To learn more about Rust streamer mode and its uses, check out our short primer in the paragraphs below.

What is Rust Streamer Mode?

Rust streamer mode is essentially a game setting you activate while playing Rust. It’s a client-based setting, which means that its effects are limited to your PC – the online Rust server and other players are completely unaffected.

Rust streamer mode was designed to help Rust streamers deal with stream sniping. Stream sniping is the practice of trying to obtain an advantage over streamers by looking at their screen while playing the game at the same time. If you’ve ever played multiplayer games in an internet cafe or at a LAN party and someone took a peek at your screen to set up a cheeky kill, this is the exact same thing, but online.

Why Do You Need to Use the Streamer Mode?

The main goal of Rust streamer mode is to prevent various kinds of abuse resulting from stream sniping. Examples of this underhand play include:

Glimpse has all the tools you need to start your career as a Rust streamer. Join Glimpse, share your Rust server with supporters, and start collecting sponsorships. You get to keep every dollar earned this way – Glimpse takes no platform fees.

How to Activate Streamer Mode in Rust?

To activate Rust streamer mode on your PC, do the following:

If you want to deactivate streamer mode, you can do so with the command:

Finally, if you want to check whether streamer mode is enabled or disabled, use the command:

You can also activate streamer mode from the options menu:

How Does Streamer Mode Work in Rust?

Once activated, Rust streamer mode prevents stream sniping by masking or hiding certain types of information on your display. Here is how it works:

While Rust streamer mode is effective at deterring most stream sniping attempts, it is not perfect. Some information will remain visible even after activating streamer mode, including:

If you’re an active Rust streamer, streamer mode is an invaluable countermeasure against hackers, griefers, and trolls.

By masking essential information on your display, streamer mode deters all but the most determined stream snipers. Its impact on gameplay is negligible, so you can simply turn it on and play your best.