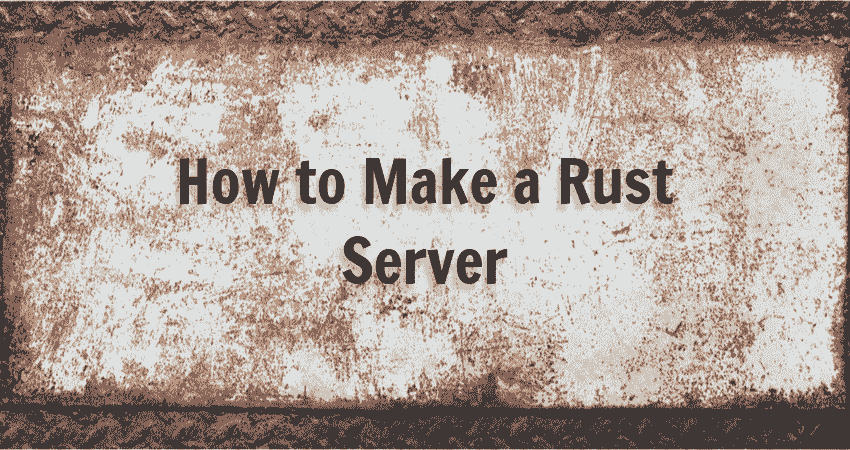 The secret behind Rust’s popularity as a multiplayer game are dedicated servers. By providing players a chance to host their own custom server, Facepunch Studios have laid the foundations for a thriving online community.

And if you want to become a part of this community, there is no better way than to make your own Rust server.

Here is everything you need to know to get a Rust dedicated server up and running.

Here are the minimum system requirements for a Rust server setup:

Unless you have a high-end gaming PC, your server might start lagging, making for a poor multiplayer experience. Limiting the number of players allowed on the server can mitigate the issue somewhat.

If your PC is not up to the task but you still want to run your own Rust server, check out PhoenixNAP dedicated game servers as an alternative to self-hosting.

You have two options for setting up a Rust server:

In this guide, we’ll walk you through setting up a Rust server with SteamCMD, and we’ll briefly mention Rust Server Manager at the end.

SteamCMD is now ready to set up a Rust dedicated server.

Glimpse is here to help Rust streamers make money from Rust gaming servers. Sign up as a creator and connect your Rust server to Glimpse. Charge access to the server while you play your favorite game with fans and supporters.

4. Configure and Run the Server

Start the Rust server in one of two ways, the first being:

Starting the server with the Command Prompt has certain benefits. You can customize the server by appending the following startup parameters to the command:

Here is an example startup command with parameters appended:

The server startup command can get quite lengthy, so we recommend using a batch script to start the server.

A batch script is simply a text file with a command on each line. When you run a batch script, each command gets executed in sequence. Batch scripts make it more convenient to run applications with complex startup parameters such as game servers.

To make a batch script:

Note: This is just an example batch file. You should adjust the “Your Server Name”, “your_server_identity”, and “Your_Rcon_Password” to values that apply to your server. You can also customize other values (see the command-line parameters table above for details).

6. Connect to Your Server

If you want to play Rust on the server you’re hosting on the same PC, you can do so by following these steps:

You should be connected to your server now.

Learn also how to make a modded Rust server. And to learn more about customizing how your Rust server behaves, check out our article on Rust Admin Commands.

If you don’t feel comfortable using the command line to manage Rust servers, Rust Server Manager is a great alternative.

Rust Server Manager is a premium tool for creating and managing dedicated Rust servers. As a paid tool, it is geared more towards professional Rust server hosting. If you’re just making a server for you and your friends, it might be too much.

Rust Server Manager is compatible with:

Hosting your own dedicated Rust server is a great alternative to playing on public servers. You get to customize the server to your liking and retain full control over who gets to play on the server.

This can make Rust’s infamously cutthroat multiplayer a bit easier to handle because it allows you to gain some experience under your belt by playing with friends. Once you have sharpened your skills, you can make the server public and invite more players from Rust’s online gaming community to join the fray.