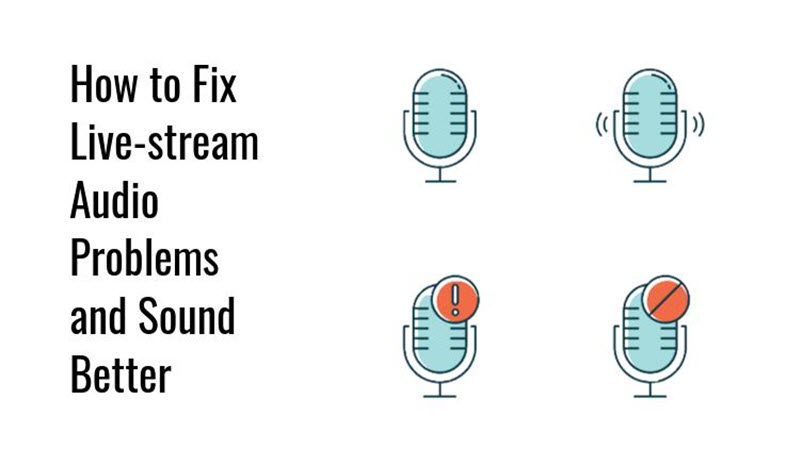 Audio problems are common in streaming and learning how to deal with them is important for every video streamer.

You can solve most streaming audio problems by tweaking your streaming software and equipment. This will enhance the sound quality of your stream and create a better experience for your viewers.

To learn more about common audio problems in streaming and how to solve them, check out our troubleshooting guide below.

There are a handful audio problems you’re likely encounter when streaming. We will go over the most common ones and suggest a solution for each.

We will cover the following problems:

Description: Your stream has missing audio. Viewers can’ hear what you’re saying, hear music from your multimedia player, or hear in-game sounds from a game you’re streaming.

Description. The vocal portion of your stream is unintelligible. Viewers can’t understand what you’re saying.

Causes. Most of the time, the issue is mic related. Cheap microphones such as phone mics often have poor recording quality, which can result in unintelligible audio. Standing too close or too far from the mic can also make your speech unintelligible, and the same goes for speaking too quietly or too loudly. Finally, your voice might get distorted due to issues with mic configuration during recording, production, and mixing.

Glimpse makes it easy to earn money by livestreaming. Sign up as a creator and start collecting sponsorships from viewers.

Description. There is an echo to your audio. Sounds, fragments of speech, or entire audio sources are duplicated, creating a reverberating effect.

Causes. The common cause of most echo-related audio issues is your mic picking up unintended sounds. For example, if your streaming is playing back in the background on the same device that does the recording, your mic will pick up the sound from your speakers. Echo can also arise as a result of your recording environment. If you’re recording in an empty room with not sound isolation, the sound will keep bouncing back and forth, creating an echo.

Description. Your stream audio and video are not synced. The audio keeps lagging behind or gets distorted.

Causes. Several possible causes. The most common is that your CPU is overloaded, so there are delays in audio processing. The issue can also arise due to a mismatch in audio frequency between the encoder and the playback device. Playback frequency is usually set to 44.1KHz, while some encoders default to 48.0KHz.

As a content creator you will often run into audio issues while streaming. But as we’ve seen, most of these issues are not too difficult to solve once you identify the underlying cause. We hope that our guide has given you a few pointers on how to troubleshoot audio issues and improve the overall audio quality of your live streams.