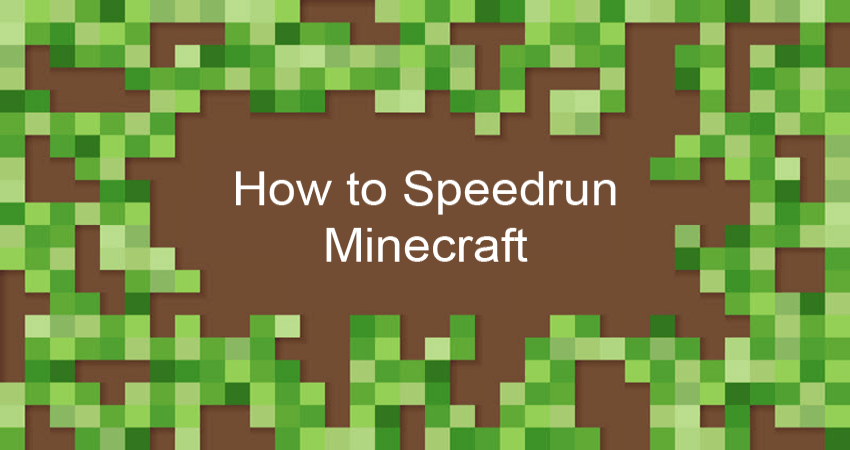 If you’re an experienced Minecraft player and want to put your skills to the test, you can attempt a Minecraft speedrun.

The challenge involves killing the Ender Dragon as quickly as possible using a limited selection of items you gather during the run. With a combination of skill, planning, and luck, you can make the run in less than an hour.

In the remainder of this guide, we’ll walk you through each step of the run.

This guide is intended for any% glitchless random seed run category. This means using a randomly generated world, beating the game as quickly as possible while skipping as much content as necessary, and not using any glitches to progress.

Check out how to set up Minecraft Server on Windows. And to learn how to use speedrunning tools in Minecraft, check out Minecraft TAS (Tool-Assisted Speedrun) & How to Use It.

During the run, you will traverse the game world to find areas of interest such as a village, a nether fortress, and others, where you will gather crafting materials needed to progress.

There are many randomly generated elements in any Minecraft speedrun. You can miss item drops, NPCs can spawn in awkward locations, and you can die at any moment from fighting high-level enemies. To compensate for this, runners take precautions such as gathering extra items, planning alternate routes and using in-game clues to quickly find areas of interest.

The run can last up to an hour, depending on how lucky you are. The current world record for any% glitchless is 11 minutes, 9 seconds.

Below is an outline of each step of the speedrun and the actions needed to complete them. Some steps can be taken out of order if you get a lucky drop. Otherwise, the run is a fairly straightforward race to the finish.

Chop some trees and mine some stone. Then, craft a stone axe and stone pickaxe. If you come across chickens, kill them to gather feathers, which are needed later in the run.

Once you have an axe and a pickaxe, look for a village near your spawn location. If it takes too long to find a village due to bad RNG, it may be quicker to restart the run.

To progress to the next phase of the run, you will need 4 iron ingots. There are two ways to quickly find iron:

The Golem route is quicker. However, the Desert Temple route has a chance of spawning gold ingots, which are needed later in the run.

During this step, you can also loot houses in the village to find beds, which are needed to kill the Ender Dragon quickly

4. Craft a Bucket and Find a Lava Pool

Once you have the iron ingots, craft an iron bucket. The bucket is needed to carry lava and water for crafting obsidian blocks. You can usually find a lava pool in the desert.

Use the bucket to splash water over lava to create obsidian blocks. Place the blocks in the shape of a doorway to create a nether portal.

Once you reach the Nether, there are several tasks you need to complete to progress. The first one is the easiest: roam around and gather enough gold ore to craft about 40 gold ingots. Trade the ingots later to acquire ender pearls.

Scout around the Nether until you find a nether fortress. In addition to containing chests with valuable items, the nether fortress can have a blaze spawner. Blazes are enemies that drop blaze rods. These can be broken down into blaze powder, one of the ingredients needed to craft ender eyes.

Glimpse is the perfect place to showcase your Minecraft speedrunning skills. Sign up for a creator account and invite fans to support you with sponsorships.

The Nether is home to Piglins, neutral NPCs that trade with the player. Trade gold ingots for ender pearls, which are the second ingredient for crafting ender eyes. You’re not guaranteed an ender pearl from each trade, so collect at least 40 gold ingots to get 12 ender pearls.

You will need 12 blaze powders and 12 ender pearls to make 12 ender eyes. You will need the eyes later to activate the end portal.

10. Use an Ender Eye to Find the Stronghold

11. Prepare for the End Fight

Kill spiders to gather cobwebs, which you can then turn into string. Combine string with sticks to craft a bow.

Arrows are made from flint, sticks, and feathers. Gather feathers by killing chickens in the village, flint by mining shoal blocks near water, and sticks from cutting down trees.

There are two ways to acquire beds:

12. Go through the End Portal

Once you have the equipment for the fight, go back to the stronghold and look for the portal room. It spawns at random, so it might take a while. Then, place the 12 ender pearls in the 12 slots and jump through the portal.

The Ender Dragon fight has two phases. In the first phase, you will need to use the bow and arrow to shoot at crystals on top of pillars to make the dragon fly closer to the ground.

Once you have the dragon in range, quickly drop a bed, and then attempt to sleep. Trying to sleep while in the End dimension will cause the bed to explode and deal massive damage to anything near it. To prevent it from damaging you, place a random block between yourself and the bed.

Detonating the bed near the dragon’s head will deal the most damage. It usually takes around 5-6 beds to kill the dragon. The run is complete the moment the dragon drops dead.

Minecraft is an excellent entry point into the world of speedrunning. While there is a lot of RNG involved, Minecraft isn’t a difficult game to run through on a technical level.

Once you learn the route, the main challenge of the run is handling the RNG. And if fortune smiles upon you, you might even get a shot at the world record.